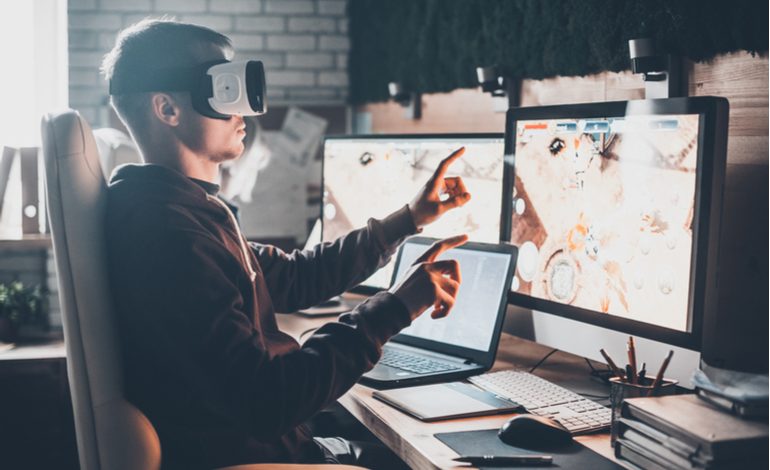 Here we look at the many current and future uses of VR for Business, Training and Entertainment, as well as answering the question “What is Virtual Reality?” as its definition is a little blurry.

Unless you’ve been dwelling in a cave recently, you’ve probably heard about VR (virtual reality). Maybe a little, maybe a lot; after all, the term is bandied about these days with increasing frequency. But do you actually know what it means?

Hearing something spoken about is not the same has having a clear understanding of what it is or how it works. For example, where did VR come from? Where is it headed? How does it relate to our everyday lives? And how can industry, commerce and educational facilities harness it to power their businesses? Let’s take a closer look.

VR Definition in a Nutshell

As might be expected, it’s not an actual depiction of reality, but a virtual reality is a simulation of a situation or environment very close to being real (virtually real). If that VR definition sounds rather like stating the obvious, let’s cut to the chase and think of it in technical terms.

According to the Virtual Reality Society, explaining VR technically is much more straightforward. In the tech world, VR describes a three-dimensional, computer generated environment that is created with the purpose of allowing people to interact with it. The person is fully immersed in a VR setting that feels real.

They can respond to stimuli, manoeuvre objects, complete tasks and interact appropriately in a controlled, safe, simulated space. The advantages of such lifelike technology are immense, and extend way beyond the worlds of gaming and entertainment, where fans have long enjoyed interacting with media through VR.

As the technology matures, it’s becoming more and more useful for training, business and marketing, among other arenas. Just consider high risk jobs, such as firefighters, paramedics, or surgeons. Through VR training, new recruits can gain key experience in a safe environment with lifelike conditions at a fraction of the cost.

Why send your trainees to the top of a mountain, or place a patient at risk when they can achieve the same results without facing real danger? Saving costs and saving lives? Pretty impressive stuff. But where did it all begin?

How Did VR Originate?

While the term VR may sound like something new and its uses are speedily evolving, it’s actually been around for a while; more than half a century, in fact. The first attempts at incorporating VR into the cinema were made by a forward-thinking cinematographer named Morton Heilig, widely considered a pioneer in VR technology.

Heilig attempted to recreate a theatre experience that would stimulate all our different senses, back in the 1950s. He was responsible for the creation of the Sensorama machine, which focused on adding movement and smell to the theatre, through kinetic chairs and odour metres.

The next major player on the VR scene was Douglas Engelbart, who came up with the idea of connecting computers to the screen, paving the way for the invention of the mouse as we know it today, for interacting with computers.

As computers continually improve and become more accessible, and video game graphics more lifelike and vivid, VR is now a vital ingredient for companies like Sony and Microsoft, with the Sony PS4 and Xbox One.

How Do We Create VR?

Coming up with an environment that feels real to all our senses is not an easy task. Special equipment is needed to make a sophisticated VR environment happen. This can include headsets, eyewear, gloves, and machines, such as treadmills, exercise bikes, and other simulators.

Some of the best headsets include the Oculus Rift and the Samsung HMD Odyssey, that provide a field of view of 110 degrees. Quality and clarity are improving all the time, and this is essential in stimulating our senses and creating the perception of a real life situation. The Virtual Reality Society stipulates that there should be a seamless connection between the user and the system, to maintain the feeling of reality.

Something as small as a faulty headset or a delay between the system’s response to the user’s action can cause the illusion of reality to come crashing down. The person becomes aware of being in an artificial environment and adjusts their behaviour accordingly.

The possibilities of VR are boundless, and it won’t be long before we can’t imagine life without it. In fact, according to a report by SuperData, the global VR market will be worth approximately $38 billion within the next three years; that’s 20 times its 2016 value!

What’s behind the rapid growth of VR? The widespread adoption of the technology in expansive areas, for one thing. If the benefits of being flung into the virtual world of a video game are obvious, its uses and possibilities in other industries can be far more far reaching, from military and science to business and marketing.

Smart Glasses company, Vuzix, aims to make training safer, increase worker productivity and allow pilots to get into the cockpit of a drone, by providing a hands-free computer with live streaming capability that the user can wear on the end of their nose.

Live streaming in VR opens up a world of possibilities, especially for remote workers in hard-to-reach locations. The wearer can connect to a computer (or computers) at any location, allowing others to get a visual on exactly what the viewer is seeing in real time.

Surgeons and other specialists can get an accurate visual on the situation without having to be there, or rely on voice commentary of events under stress. Remote technicians working on site can solve a problem on the first call out, without the need to assess and return. This makes for augmented worker productivity, reduced cost, and can help save lives in an accident and emergency situation.

VR has the potential to change the way businesses work, from the operating room to the factory floor, telemedicine and remote tech support. It’s also useful in the field of employee learning and practical training. Allowing the wearer to view the computerised image, as well as their actual surroundings. They can watch a tutorial and follow instructions at the same time.

Healthcare workers, for example, can learn on the job and carry out important maneuvers, such as CPR, while receiving exact indications on their screen. White collar workers can take notes, carry out exercises and interact with training videos, speeding up the learning curve.

Large brand names are continually adopting VR for training, from Kentucky Fried Chicken to Walmart. The retail giant’s “Walmart Academy” training centres will all have VR incorporated by the end of 2017. New employees will enter different simulated situations, by putting on an Oculus Rift headset.

Virtual Reality For Business and Marketing

According to Fortune, more and more US businesses are turning towards VR to reduce costs and increase profit. In fact, companies as diverse as snowmobile manufacturers and furniture sellers are beginning to incorporate VR into their businesses. Snowmobile manufacturer, Arctic Cat, have developed virtual reality rides to allow their customers to test drive their snowmobiles without having to actually, physically prepare the vehicles.

From a marketing perspective, managers with large budgets are rubbing their hands with glee, as VR offers endless opportunities for customers to interact with their brand. They can try out products before buying, without actually having to test them. According to research by the International Data Corporation (IDC), 30 percent of Forbes 2000 companies will have used VR in some capacity this year, from product testing to video marketing.

Global car brand, Mercedes, is among the list of companies getting creative with VR in marketing, revealing their latest SL model with a virtual drive on the Californian Pacific Coast Highway. Through VR, users were able to check out the car’s interior and even take a look through its sunroof and glimpse the Pacific Ocean out of the window.

Biscuit manufacturers, Oreo, crafted a virtual, animated world to promote their new Filled Cupcake Flavored cookies. Users were transported to a fantasy land, that was like something out of the movies, with chocolate milk rivers and canyons. This extraordinary video received millions of views.

The Future of VR

In the not-too-distant future, VR could soon impact all our senses and even become a new way of experiencing reality. Facebook is an example of a company placing all its chips on VR development, adding a live-streaming feature to its VR app, Spaces. This allows users to stream a two-dimensional feed of themselves to people outside the VR platform, connecting them with the real world.

With more companies like this social media giant continually attempting to bridge the gap between traditional VR headsets and conventional computing platforms, VR could start to infiltrate many of our lives more quickly.

If you thought that VR was a technology limited to the realm of video games or theme parks, your eyes should now be open. VR is in fact everywhere, and the possibilities are endless.

Removing danger from training situations, reducing expense for businesses, and providing customers with greater freedom to test drive products and services – VR is changing the way that we interact with digital technologies.

Making waves in the gaming and entertainment industry, the field of drones, medicine, enterprise and beyond. Increasing worker productivity in the factory, helping emergency workers do their jobs, facilitating training, and even saving lives. The future is here today, and it’s virtual.

What is Green Technology in 2023? The Greentech, Climate Tech & Cleantech Guide